Fellaini told to keep his cool 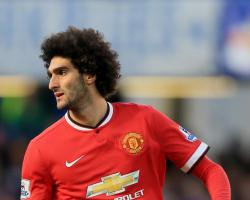 Fellaini missed United's defeat at Everton last year through injury so Sunday's match at Goodison will be the first time he has been back to the ground where he enjoyed five successful years.

The Belgian was something of a cult hero for many Everton fans so the news of his ÃÂ£27.5million move to United at the beginning of last season did not go down so well among many of the Toffees' faithful.

Fellaini has been accused of having a fiery temper at times, so with that in mind, Van Gaal felt it necessary to speak to the 27-year-old, who has been in fine form recently.

"I have spoken with Fellaini because I know this," the United boss said.

"Fellaini is always dry in his answers

United head to Everton without first-team regulars Phil Jones, Michael Carrick and Marcos Rojo, who have still not recovered from the injuries that kept them out of last week's 1-0 defeat to Chelsea.

Van Gaal also confirmed right-back Rafael would be out for the rest of the season with a rib injury he suffered in an Under-21 match versus Leicester on Monday.

'He has broken his ribs so he shall not play any more this season for Manchester United," Van Gaal said of the Brazilian, who has not started a Barclays Premier League game since October

That does not necessarily mean striker Robin van Persie will be given his first start since overcoming an ankle injury that kept him out for two months though.

Van Persie played 62 minutes of the Under-21 draw at Leicester on Monday, but he may have to play for the youth side again before earning a first-team start.

"He has to train very hard and play in the second team and show his qualities again," Van Gaal said of his compatriot.

"Then I have to compare him with the positions he can play with the players in that position."

Last week's defeat at Chelsea brought to an end a run of six straight wins for United.

That streak had cemented their place in the top four, but Van Gaal is still not completely happy with his team's position in the table.

He would like to finish above Manchester City, who are one point behind the Red Devils in fourth, as that would mean United would qualify directly for the Champions League.

Van Gaal experienced a nervy Champions League qualifier against Skonto Riga in 1997 when his Barcelona team - which included the likes of Pep Guardiola, Luis Enrique and Luis Figo - edged into the group stages with a 4-2 victory over two legs.

The Catalans needed a last-minute goal from Hristo Stoickhov to win the first leg at the Nou Camp and Van Gaal wants to avoid another qualifying round in August.

''Your preparation for the new season is more easy then."

Van Gaal's predecessor David Moyes was sacked after this fixture at Goodison last year, with United languishing in seventh position.

Van Gaal's job is secure - even if United do not finish in the top four.

In fact, the Dutchman has already started planning for next season.

His scouts have been assessing potential targets and new deals have been handed to a number of players including Chris Smalling, who signed a new four-year contract this week.

''We have already extended a few contracts

We are busy with next season,'' Van Gaal said.

''I don't discuss it with the media,'' Van Gaal said of the 21-year-old, who was a regular for Holland under the United manager.

''I have a lot of relationships with players

I cannot buy all the players I've coached already.''