Fenerbahce top Group A with win in Feyenoord 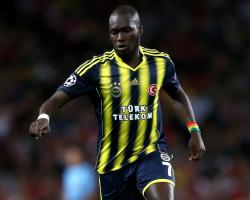 Feyenoord needed to win the match and hope Manchester United lost to Zorya Luhansk in Ukraine for any chance of qualifying for the last 32 of the competition but were beaten by Moussa Sow's first-half strike.

The Senegal international was quickest to react to Rick Karsdorp's poor header aimed towards goalkeeper Brad Jones, with Sow volleying in acrobatically for the only goal of an entertaining match.

The visitors had the first chance of the match after seven minutes when Hasan Ali Kaldirim's cross evaded everyone in the box before falling to Alper Potuk at the back post but the winger could only blaze wide from seven yards.

Sow should have done better four minutes later when Jeremain Lens dispossessed Miquel Nelom and squared the ball to the striker before scuffing his effort straight at Jones.

The hosts almost went in front when Jens Toornstra's powerful header forced Volkan Demirel into a terrific reaction save to keep the game goalless before Eljero Elia dragged the rebound wide.

But Sow redeemed himself in the 22nd minute as he gave the Turkish side the lead with the help of some poor defending by Karsdorp.

He instinctively tried to head the ball back to goalkeeper Jones but Sow anticipated to fire in with an overhead kick.

Tonny Vilhena rattled a post just before the break as Feyenoord pushed for a way back in the match, with Dirk Kuyt blazing over when in a good position shortly after the restart.

Feyenoord continued to pile on the pressure with Vilhena putting in a great cross which found Kuyt but he could only direct it wide of the post.

The former Liverpool man spurned another chance with six minutes left but his low shot lacked any power, much to the relief of Demirel.

The hosts continued to push with Michiel Kramer flicking a low cross towards the far post but Demirel gratefully held the ball under pressure.

There was one last chance for Fenerbahce but Simon Kjaer's 25-yard free-kick drifted wide of the right-hand post as Fenerbahce took maximum points.