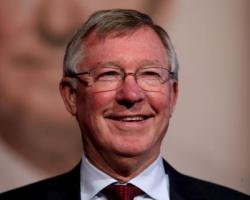 The former United manager, who departed after almost 27 years in charge last summer to make way for Moyes, has seen the Red Devils struggle to impose themselves in the title battle this season and get eliminated from both domestic cup competitions.

Last season's champions are crawling along in seventh place this time, six points outside the top four and a further eight points behind leaders Arsenal.

Ferguson says there is no limit to what United can achieve, but he concedes second-placed Manchester City are looking a major force as the campaign moves towards its crucial stage, and he also sees Arsenal as stayers in the race for silverware.

"United can do anything. They have got that great philosophy and history, they will always do well," Ferguson said.

"I can watch the team whenever I want and I've really enjoyed it. I'm going as a supporter now and instead of suffering with the team, I'm suffering or enjoying it with the fans. I'm really enjoying watching the team play."

The retirement of Ferguson and the transitional phase of former Everton manager Moyes moving into the top job at Old Trafford has been cited as a factor behind the United team's regression.

There have also been suggestions that Ferguson's regular presence in directors' boxes at United matches may not be helping Moyes to settle in, given plenty of focus continues to be afforded to the 72-year-old Scot.

Yet Ferguson, named a UEFA coaching ambassador on Friday, sees the competitive nature of this season's Premier League as a cause to celebrate, while holding out hope for a late United surge.

"This year for the first time it really looks as if five or six could be involved (in the title race), so it's a great Premier League," Ferguson told Sky Sports News.

"It's still not an easy league to win. I think the English game is the most honest and is the hardest league to win in terms of the competition you face. You can lose to anyone.

"You have to say Manchester City are playing so well, there is no dispute about that, but the teams at the top at the minute must have a big chance.

"Arsenal must have a big chance. Everyone keeps writing them off, saying they won't last, but we're into the second half of the season and they are still there. Then you've got Chelsea, Everton, Tottenham, who are starting to do well.

"United always do well in the second half of the season, so we've got a fantastic league and we should be proud of that."