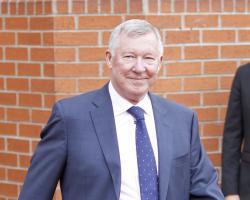 The Scot amassed 38 trophies in 27 years at United, creating a dynasty that shaped the Premier League era for years

His phenomenal success led to a stand being named after him at Old Trafford and a bronze statue of him being erected outside the ground.

No top-flight British manager has lifted silverware as many times as Ferguson, but he says winning is in the fabric of the club and there would be no sour grapes from him if anyone surpassed his achievements.

"We had a wonderful run of success when I was here and we won a lot of trophies," he told the Sunday People

"But I really hope sÃâÃÂ­omeone comes along and breaks my record here, I really do.

Nothing would make me happier.

"Why? Because it's a food chain at this club

First there was the great Sir Matt Busby and then there was me.

"Now I'd love someone else to come in and establish a long run of success because that's what this club is all about."