Fletcher can leave for nothing 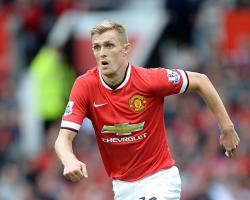 Fletcher was a regular in Louis van Gaal's starting XI on the pre-season tour, but the arrival of Angel di Maria and Daley Blind has restricted the Scot's playing time.

Fletcher, 30, has only started four Barclays Premier League games this season and Press Association Sport understands the midfielder has been informed he is free to end his 20-year spell with the club this month if he wants to.

West Ham are said to be leading the chase for the Scot's signature but Valencia and West Brom are also interested in signing the player, who was made United vice-captain shortly after the squad returned from the United States last summer.

It remains to be seen whether Fletcher will turn out in a United shirt for the 343rd and final time this weekend when the Red Devils host Leicester at Old Trafford.

He also has two League Cup winner's medals and was part of the United team that lifted the FA Cup in 2004.

He has had difficult times at the club too

The Scot was sidelined for almost two years after being diagnosed with debilitating disease ulcerative colitis.

Meanwhile, Fletcher's team-mate Robin van Persie is in the dark over his future.

The striker's contract expires at the end of next season and he concedes he has no idea whether he will remain at the club.

When asked if he would like to sign a new deal, the striker said: ''It is not up to me

For the moment I am staying here for 18 months.

''That is it really

I can't look into the future

I don't know what is going to happen after that

We shall have to wait and see.''

Van Persie was refreshingly candid when discussing his poor form at the launch of Manchester United's new partnership with Swissquote at Old Trafford on Monday.

Others are guilty of under-performing too

United's 0-0 FA Cup draw with Cambridge last week was littered with mistakes, while in the Premier League the Red Devils have just three points more than they had at this stage last term.

''Obviously we are not scoring enough goals, including me,'' Van Persie said.

This year I have played something like 20 games and I have scored eight goals.

''I am not happy with that

I want to score more

I will do everything, every day in training and during the games I will keep doing what I have been doing for the last 10 years to make those goals

It makes so many people happy, including me."