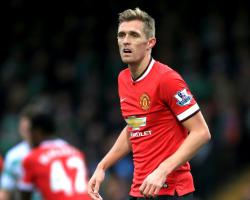 The long-serving midfielder looked set to leave Old Trafford for the Hammers after he had a medical at the London club on Friday.

But United boss Louis van Gaal said after Saturday's win over Leicester that the deal had fallen through after West Ham moved the goal posts.

Van Gaal claims the Hammers wanted to make the deal temporary, rather than permanent, causing the deal to collapse.

"But at the end they look for a loan and that was not the agreement.

"When you allow your player to go to London for the medical, there is no problem

At the end there is no agreement, it is strange.

On Saturday it is off."

"Fletcher broke down on negotiations this morning

I really don't know (what will happen) at this moment in time," Allardyce said.

Fletcher has also attracted interest from West Brom and Valencia.

But Van Gaal appears to think the 30-year-old will remain at United, where he has five months left on his contract.

"I think so," Van Gaal said when asked if Fletcher was likely to stay at United.

Fletcher has been at United for 20 years, but his experience has not been enough to earn him a regular first-team place under Van Gaal.

The Scot has started just four Barclays Premier League for the Dutchman even though he was named as one of two deputies - along with Michael Carrick - to captain Wayne Rooney at the start of the season.

The United boss hopes he can give the midfielder more playing time in the rest of the season.

"He is my third captain so it is not a problem for me (if he comes back)," Van Gaal said.

For him now that is a big pity.

"We want to help Fletcher

That is my only concern

I am very happy he is coming back."