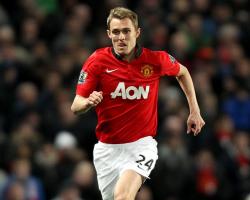 Fletcher's career was hanging in the balance after he was forced to undergo surgery to cure a medical condition that had bothered him since 2010.

Had the procedure not worked, the 30-year-old's life as he knew it would have been shattered.

Happily, that particular story had a positive outcome, allowing Fletcher to resume his career at Aston Villa in December, since when the Scot has gone on to make eight appearances, including skippering the Red Devils in their Capital One Cup semi-final against Sunderland.

His inspirational story provides an obvious example for youngsters affected in a similar way to follow.

However, Fletcher remains the hard-nosed professional he always was.

Which is why his overriding concern is improving United's season rather than accepting the congratulations for what he has personally achieved.

"That is a dangerous mindset to get into.

"Although I would probably have every right to do that, I don't want to

I still want to push myself because I realise that there is nothing stopping me now.

"I want success for this club

I want to help achieve things with this club.

"I am hurting just as much as everyone else at present.

"I am not just happy to be back and don't care.

"There is a real determination around the place - and it is no different for me."

Along with former England rugby captain Lewis Moody, the Scot will host the first United for Colitis event - a Charity Dinner to be held at Old Trafford on March 27, which will be supported by Sir Alex Ferguson and many of Fletcher's first-team colleagues.

By then the midfielder hopes United's fortunes will have improved markedly, and he will have played a major part.

The defending champions are currently seventh in the Premier League, 15 points behind leaders Arsenal and seven adrift of the top four

United are also out of both domestic cup competitions.

I always realised how fortunate I was to be a professional footballer and play for Manchester United," he said.

"I know how hard I worked to get here and I am not willing to let that go away quickly."

With under-fire manager David Moyes and his coaching team in Greece to watch Champions League opponents Olympiacos overcome Panionios 2-0 on Wednesday, Fletcher spoke with authority at how he was working his way through a bucket list of aspirations - including a return to European action.

"I am ticking them off as I get to different points," he said.

"First it was to come back, then my first start, playing in Europe, all those things.

"As a professional you need that motivation

At this club we win the title and say 'yeah great, go and do it again next season'.

"Even when I finish my checklist, I will go and do it again

I have always been brought up that way.

"That is the way this club is."

And for Fletcher, who may be recalled for Scotland's friendly in Poland next month, it is also about assuming responsibility and offering support to younger team-mates who have never known anything like the struggles experienced at Old Trafford this season.

"I have been through situations of not having success and being written off," he said.

"I am telling the younger ones that we have been here before.

"You have to keep that belief inside yourself and use it as a fuel to prove them wrong.

"That is what I tried to do.

"You are always proving yourself at Manchester United, whether it be in the team, becoming more experienced, coming back from illness.

"That is the challenge of playing for this club

It is about reiterating to the younger players that they have to believe in themselves, work extra hard, keep digging in and their quality will come through."

For more details about the charity dinner visit www.unitedforcolitis.co.uk

For quick donations text UFCO99 and the amount you wish to donate to 70070.