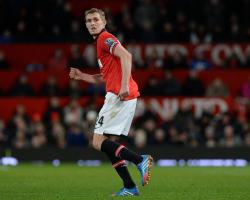 At times during that difficult campaign eight years ago, it seemed United were headed for oblivion.

Within the space of three weeks Roy Keane was booted out by Sir Alex Ferguson, sponsors Vodafone quit their shirt sponsorship deal two years early and United crashed out of the Champions League at the group stage.

Against the backdrop of a fans revolt in the aftermath of the Glazer family's controversial takeover that had been completed just a few months before, it seemed United's time at the top of the English game was over.

However, although they were well off the pace being set by eventual champions Chelsea, United finished the season with a flourish, bouncing back from a 4-3 defeat at Blackburn by winning 11 of their final 14 games to clinch second spot.

With Patrice Evra and Nemanja Vidic settling in and the Carling Cup secured too, the Red Devils had built enough momentum to ride over the storm created by Ruud van Nistelrooy's exit and went on to enjoy one of the best three-year spells of their entire history.

Fletcher was part of the squad that won a hat-trick of titles, lifted the Champions League, played in another final and a semi-final, and also collected the League Cup and figured in the new Wembley's first FA Cup final.

And that is what he is reminding United's current youngsters of now.

"Seasons can be turned on one result, one cup win, one massive performance

This can be the catalyst for future success.

"We have got to reflect on that and realise it has been done before.

That carried onto the next season because that is the standard that we have set, that is what we know we are capable of.

"There is no doubt about it, we need to get back to that

The goal is always to respond and be successful.

"If we can finish the season on a high, get as high as possible in the league and go far in the Champions League then who knows what can happen."

Given United have lost to Stoke, been dumped out of the Capital One Cup by Sunderland and were beaten by Swansea at Old Trafford in the FA Cup already in 2014, lifting the biggest trophy of all seems somewhat fanciful.

Yet Chelsea and Liverpool have all managed it from outside the top four.

Liverpool lost an incredible 14 times in 2004-05, finishing level on points with Bolton and ending the campaign 37 points adrift of champions Chelsea.

The Stamford Bridge outfit were not quite as bad seven years later, however, they could do no better than sixth in the Premier League following a dismal season that included Andre Villas Boas' dismissal.

So, if they can do it, why not United?

"We have got a tough tie against Olympiacos but if you get through that then we would be in the quarter final," Fletcher said.

"Then there would be only eight teams left.

"Our form has been good in the Champions League, so if we can carry that on and achieve a bit of success, it will set us up for next season."

Fulham have shown no improvement during the Dutchman's short tenure and were knocked out of the FA Cup on home soil by League One strugglers Sheffield United on Tuesday.

"There aren't many games left this season and we have got to finish in the top four, that is the real challenge for us now," said Fletcher.

Fletcher was speaking alongside Lewis Moody at Manchester United's Aon Training Centre at the launch of 'United for Colitis'.

The brainchild of Alex McLeish's son Jon, United for Colitis is a new fundraising initiative in aid of parent charity - Crohn's and Colitis UK.

The first United for Colitis event will be a Charity Dinner held at Old Trafford on March 27, which will be supported by Sir Alex Ferguson and many of Fletcher's first-team colleagues.