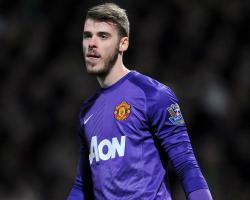 United were less than two minutes away from securing a Wembley date with Manchester City when De Gea allowed a weak Phil Bardsley shot to slip through his fingers.

Though the hosts responded immediately through Javier Hernandez, it was only enough to send the tie into a penalty shoot-out, which ended in farce as only Fletcher was successful from United's five kicks, allowing Sunderland to scrape through.

It was yet another dismal night for manager David Moyes.

However, for De Gea, Fletcher does not believe there is any blame attached.

"David will be fine," the Scotland midfielder told MUTV.

"He has been fantastic for us. There has not been a better goalkeeper around for the last 18 months.

"He has been one of the most positive things about this season.

"He is disappointed but all goalkeepers make mistakes and he will show what a top goalkeeper he is."

Fletcher believed De Gea atoned for his error by making a key shoot-out contribution, in particular denying Adam Johnson with the kick that would have won the game for Sunderland.

Unfortunately for the hosts, it just proved to be the prelude for more misery as Rafael failed from the spot, just as Danny Welbeck, Adnan Januzaj and Phil Jones had done beforehand.

"Penalties are a lottery but we should still be disappointed with our execution of them," said Fletcher.

"We had the momentum going into the penalties but it didn't pan out the way I thought.

"At Old Trafford, to only score one is disappointing, there is no denying that."