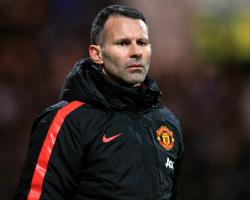 Di Maria became British football's most expensive signing when he joined United from Real Madrid for ÃÂ£59.7million last August but the Argentina World Cup star has struggled to justify that huge fee since scoring three times in his first five appearances.

The 27-year-old wideman has netted only once in 19 games and been substituted in United's last three Barclays Premier League matches.

But United assistant manager Giggs is adamant Di Maria has a big part to play in the club achieving their end-of-season goals, starting with Arsenal's FA Cup quarter-final visit to Old Trafford on Monday night.

"He's a quality player and we'll be looking for him to produce because it is big game after big game now.

"Players get used to different leagues, sometimes quickly and sometimes it takes a bit of time.

"He had a really good start to the season but with players who take risks and who can win games it's always difficult to be consistent because they will try things that other players won't do.

"They're capable of doing that and that's why they're match-winners and the best players."

United are involved in a thrilling race for Champions League football with Arsenal, Liverpool, Tottenham and Southampton still chasing a top-four Premier League finish as well as top two Chelsea and Manchester City.

Louis van Gaal's side are currently fourth after losing only two of their last 18 league matches and, although the nature of United's performances have often been criticised, Giggs says that form counts for far more at this stage of the season.

"This is the time really when results are the top focus and then the performances will come and the confidence you get from that," said Giggs, who again denied media talk of a rift with Van Gaal by saying they had a "great working relationship".

"I think we've tried a lot of systems this year and obviously the manager's new to the players and new to the league, so that's going to take time.

"But over the last three months or so we've only been beaten twice and we're in pretty good form.

"It's tight and all the teams up there are in relatively good form.

"It could come to a few head-to-heads and we've got to play a few of the top teams yet, so it's going to be exciting right to the end."

Before then, however, United are focusing on the FA Cup and opponents against whom Giggs memorably scored an FA Cup semi-final winner in the club's 1999 'Treble' year.

United have won the competition a record 11 times - a total cup holders Arsenal matched last year by beating Hull at Wembley - but not since 2004 when Giggs was part of the side which beat Millwall 3-0 at the Millennium Stadium in his native Cardiff.

"We've got so much history in the cup that it's long overdue," Giggs said.

"The club as a whole, the players and the fans are desperate to get to Wembley.

"We've had great battles and tussles over the years with Arsenal, especially in the cup.

"Of course, I've got fond memories of the semi-final (1999) and they beat us in the final (2005), but hopefully we can get through to the semis because whoever goes through in this tie has a great chance of winning the cup."

Giggs won the FA Cup four times during a celebrated United senior playing career which spanned an incredible 24 seasons but admits he is learning all the time on the coaching front.

"He's been brilliant with me and we've helped each other along the way.

"He's come into a new league which I know all about

I'm starting all over again with coaching and serving an apprenticeship and who better to learn from than someone who is a great leader and has won so much over the years?

"I'm learning all the time and just trying to prepare myself the best I can that if I do become a manager I'm best equipped."