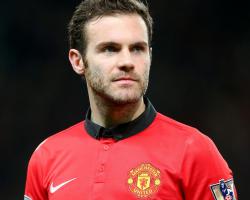 United smashed their transfer record to bring Mata to Old Trafford and the Spaniard has made a relatively decent start so far.

Mata played a part in the build-up to Robin van Persie's opener on his winning debut against Cardiff and he also set up the Dutchman against Stoke - although United eventually fell to defeat against the Potters.

As the most decorated player in the club's history, Giggs knows a thing or two about what it takes to be known as a United icon.

And there was little hesitation in the Welshman's reply when he was asked if Mata, 25, could become a United great.

"I think he could be," the midfielder told MUTV.

"He's obviously got the talent.

"I don't want to put too much pressure on him but I don't see why not."

While Mata has a long way to go before he matches the achievements of Giggs, Paul Scholes, David Beckham and co, there is little doubt among the United squad about the short-term impact Mata's signing has made to David Moyes' squad.

Results may still be lacking - Saturday's loss at Stoke means United are seven points behind fourth position - but a marquee signing has done much to boost morale.

"The players are just like the fans," Giggs said

"When they see a quality player come through the door, it gives them that excitement and you feel it around training

It gives everybody a lift.

He's fitted in straight away and speaks really good English - better English than most of the lads!"

It is not just a one-way street, however

Mata will also benefit from moving to United, Giggs reckons.

One of the main reasons why Mata made his ?37.1million move from Chelsea was because he wanted to boost his chances of playing in the World Cup.

"Coming here will help him with regards to playing for Spain if he is playing week in and week out [for United]," Giggs added.

Although the United squad of 2013-14 does not compare favourably with the one that brought Giggs so much success in the 1990s, one current player certainly holds lofty ambitions.

Adnan Januzaj may only turn 19 on Wednesday, but he has already outlined his ambition to win trophies and become the club's best player.

"I am quite pleased with my year, I have done a lot of work and have been integrating into the first team," said Januzaj, who is regarded as one of the club's brightest prospects in years.

I hope to win trophies at this club and be the best player."

Mata's arrival means there is much more stern competition for Januzaj, but the United midfielder thinks his game will only improve now that the Spaniard is on the books at Old Trafford.

"He is a great player and I think I am going to learn a lot from him," Januzaj said.

"He is a technical player who is very clever

He scores goals and gives assists

We are very happy to have Mata at the club

I think he has settled in and he is happy and I hope he will be happy at the club."