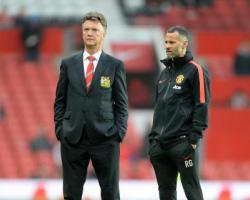 Suggestions of a problem between the pair emerged when former midfielder Giggs was cool in his celebrations after Ashley Young's winning goal against Newcastle on Wednesday.

However, the 41-year-old dismissed talk of tension and praised United boss Van Gaal.

"It's coming to that part of the season where the media will look at any little thing to make it more exciting and more interesting," Giggs told BBC Sport.

"Me and Louis have a great working relationship

He's given me a massive opportunity and I'm taking it

I'm working as hard as I can and I'm enjoying every minute of it."

Giggs was handed the reins at Old Trafford for the last four games of last season after David Moyes' exit before being given the role of assistant alongside Van Gaal when he joined the club in May.

The former Wales international is relishing the task of being involved at the club where he spent his entire senior career and learning from the 63-year-old Dutchman.

"He's won everything and to work under someone like Louis is a great experience for me and he's been brilliant with me," Giggs added.

"He's given me a lot of responsibility and of course I have told him as much as I can about the Premier League and what to expect.

"I've really enjoyed working under him and learning something new every day."

He told a news conference: ''No

We have a very bad relationship

I cannot answer that

I want to have those rumours.''

He then added: "I am very irritated at this question because everyone can see we have a very good relationship

We work very hard together

It is a way of suggesting things

I am very irritated

I take my measures against the media