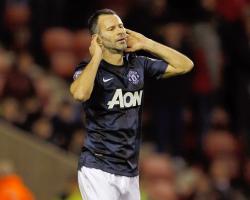 The 40-year-old Welshman, in particular, was out of luck on Wearside on Tuesday night as the Red Devils slipped to a 2-1 first-leg defeat, which leaves them with work to do when the sides meet again on January 22 to determine who will make the trip to Wembley.

Giggs rattled the bar with a deflected shot, denied Adnan Januzaj a third goal at the Stadium of Light this season with an unwitting block from an offside position and then bundled Wes Brown's cross into his own net, all before the break.

However, he is confident the tie is far from over and is already eagerly anticipating a second crack at the Black Cats.

Giggs told MUTV: "We did not have that little bit of luck. I hit the crossbar and Adnan hit a shot against me when I was offside.

"On another day that would have gone in or been given, but it just did not go for us.

United were left to reflect on a difficult 90 minutes in the north-east after slipping to a third successive defeat - Tottenham and Swansea have both won at Old Trafford inside the last week or so - for the first time since 2001.

It was a reverse which left manager David Moyes with further questions to answer, with the reigning champions 11 points off the pace in the race for the Barclays Premier League title and having bowed out of the FA Cup at the first hurdle at the weekend.

But it was they who looked to be assuming control of the first leg as the clock ticked into stoppage time at the end of the opening 45 minutes until Sunderland were awarded a free-kick, much to Moyes' annoyance.

His mood took a further turn for the worse when Brown was allowed to return Sebastian Larsson's delivery across the face of goal, where Giggs and Phil Bardsley converged on the ball only for the former to get the decisive touch.

Skipper Nemanja Vidic dragged the visitors back into it within seven minutes of the restart when he climbed above John O'Shea to power home Tom Cleverley's corner.

However, Cleverley's trip on substitute Adam Johnson - the midfielder appeared as horrified as his manager later revealed he was at referee Andre Marriner's decision, which was taken on the advice of assistant Peter Bankes - gave Fabio Borini the chance to smash home a 65th-minute penalty.

Giggs said: "I thought both decisions were harsh.

"I thought the first one was a free-kick to us - but saying that, we still have got to defend the free-kick.

"We got punished for that, but we were getting back into the game with a great header from Nemanja, and it looked like there was only going to be one winner.

"We created enough chances, but unfortunately the decisions went against us.

"We were quite happy with our performance. We felt we did enough to at least get a draw, although I think we can work on the quality of our crosses and shots when we get into the final third.

"The only chances they (Sunderland) really had were set-pieces. It was just one of those nights."

United have a fortnight to plot their revenge, with Black Cats boss Gus Poyet insisting they remain favourites to progress.

However, in the meantime, Moyes' men face the task of arresting a slump which has provided fresh fuel for the fires of their critics as they prepare for Saturday's home league clash with Swansea and a trip to Chelsea the following weekend.