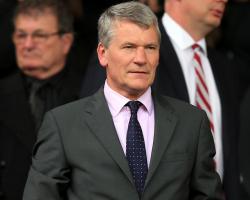 Gill, who is also vice-chairman of the Football Association, will succeed Northern Ireland's Jim Boyce in May and will have a four-year term on FIFA's executive committee.

The 57-year-old beat Football Association of Wales' president Trefor Lloyd Hughes by 43 votes to 10 in the election by UEFA's 54 member nations at their congress in Vienna.

FA chairman Greg Dyke has said he wants Gill to be part of the "awkward squad" on FIFA asking tough questions and keeping an eye on financial decisions.

Earlier, Lloyd Hughes and Scottish FA president Campbell Ogilivie failed in their attempt to be elected to UEFA's executive committee

The new names on UEFA's executive committee include the former Croatia and Arsenal striker Davor Suker, and Boris Mikhailov, the former Reading and Bulgaria goalkeeper who was renowned for wearing a wig even in matches