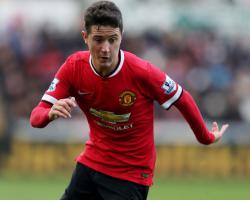 Herrera has become a regular in Louis van Gaal's team of late, starting the last seven games in all competitions.

It was a different story earlier in the season though

Despite impressing on the club's pre-season tour of the United States, the ÃÂ£29million summer signing from Athletic Bilbao could not hold down a first-team place.

Although he started just six league games before the middle of February, the Spaniard, speaking to El Pais, was convinced he had made the right decision in moving to England.

"Manchester United are the second wealthiest club in the world, and they continue looking for talent

Everyone takes time (to adjust)," the United midfielder said.

"Now I am playing more, but when I wasn't playing I always knew in my head that I came here to play five years minimum, not just a few months."

Herrera discussed many topics in the interview with the Spanish newspaper.

The 25-year-old said David de Gea had told him there was less of a hierarchy in the squad with the likes of Paul Scholes, Ryan Giggs and Rio Ferdinand having retired.

Herrera also revealed Wayne Rooney has been picking up some of the language used by the Hispanic members of the squad.

When asked about any jokers in the camp, Herrera said: "Rooney leads because he is very open and he insults us in Spanish."

Herrera poked fun at the United skipper for his shadow-boxing celebration against Spurs.

"I'd rather talk to him about football because he likes boxing and could try with me," he added.

Herrera also gave his backing to Van Gaal, although he is wary of getting too close to the Dutchman.

"I keep my distance with Van Gaal," the midfielder said.

"But he's a good guy with a strong character.

"He likes discipline and doesn't believe in egos in the squad.

"He loves possession and he doesn't like risking losing the ball.

"At the beginning he used to tell me off because I always looked for the ball, I wanted to have it, and I must wait for it."

"The last time I cried?" he said

He's so good! But anyway, I get emotional very easily.

"But hey, I get excited easily and not only with the major teams

I'm a classic man and I was delighted when we played vs Yeovil Town in front of 8,000 standing people yelling at me: "Who are you?""