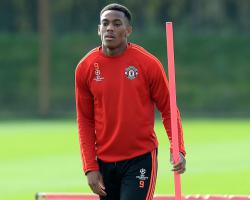 Louis van Gaal spend heavily in the previous transfer windows and looked to bolster his squad in order to prepare for EuropeÃâs elite competition.

They have also struggled for consistency in the league and have regularly been branded as ÃâboringÃâ this season.

How much have their summer recruits contributed this season?

For an initial fee of ÃÂ£35m, leaked documents have suggested the deal could potentially rise to upwards of ÃÂ£60m

Nevertheless, the deal made him the most expensive teenager in history

However, MartialÃâs form dipped drastically with Van Gaal being targeted as the reason why

After such a blistering start, expectations were high and MartialÃâs poor run of form has been coming as the youngster is not being utilised correctly

If Van Gaal is replaced, Martial should return to the number nine role where he can flourish in United red.

He has shown he is more than worthy of playing for United and could prove to be a vital player in the next few years.

The Dutchman has set the Eredivisie alight with PSV earning him a regular role with the Dutch national team; formerly managed by Van Gaal.

Although it is early days in his career in Manchester, Depay has not looked the same player whose 22 goals led PSV to the title

There is still plenty of time for Depay to prove he can be a vital player for the Red Devils but improvement is needed.

After man of the match performances in his first two appearances, the 25 year old has struggled to re-discover his early season form as injuries has forced the Italian to fill in at left back

He was hauled off at half time against Arsenal as he struggled to cope with the class of Alexis Sanchez.

Nevertheless, Darmian has been one of the better right backs in the league this season and ÃÂ£12m represents good value for money to fill an important position

Schweinsteiger developed a reputation as one of the worldÃâs best midfielders after leading Munich to numerous trophies during his time in Bavaria.

Although the deal for the German was a cheap one, Schweinsteiger has not had the desired impact on the United side yet

He was criticised by Van Gaal earlier in the season and needs to start showing that he can become a leader for the Red Devils.

The Argentine made 71 league appearances and signed a three year deal at Old Trafford.

However, injuries and transfer speculation with De Gea meant the Argentine started UnitedÃâs first six games including a vital home game against Tottenham

Romero made a good start and did not concede in his first three games.

With De Gea back between the sticks, Romero has reverted to a backup role following a costly error against Swansea at the end of August

Remains a decent back up option.