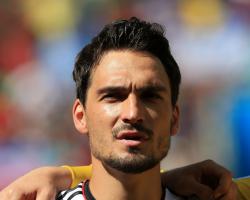 It has been claimed the World Cup-winning Germany centre-back once gave former United manager Sir Alex Ferguson his word he would move to Old Trafford some time in the future.

But now, in the light of reports linking the 26-year-old with a summer switch to United, the player has dismissed such suggestions.

Hummels tweeted: "To clarify it: this supposed "promise" is simply fictitious ..

and that's the friendly formulation."

Hummels, who could cost from ÃÂ£30-40million, has long been linked with United, most recently in the January transfer window.

No deal materialised then but rumours have persisted with manager Louis van Gaal a known admirer of the player and thought likely to want to bolster his defensive ranks in the summer.