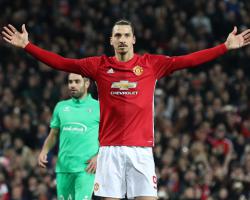 United did not offer Ibrahimovic a second year on his contract at the end of last season, but the club confirmed on Thursday that they have agreed a new deal with him