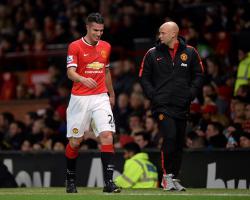 Van Persie's World Cup header against Spain is one of three goals shortlisted for the Puskas goal of the year award, which is due to be handed out at a lavish ceremony in Switzerland on Monday evening.

Van Persie has been told not to fly to the event, though, because of the ankle injury he sustained in United's 1-0 defeat at Old Trafford on Sunday afternoon.

If Van Persie beats Ireland's Stephanie Roche and Real Madrid forward James Rodriguez to the honour, his compatriot Ruud Gullit will receive the award on his behalf.

"On advice of the club medical staff I am unable to fly out to Zurich tomorrow (sic) to attend the FIFA Ballon d'Or gala for my nomination for the Puskas award," Van Persie Tweeted on Monday.

"I wish everybody there the best of luck and a great evening.

"I will be watching it from home and my good friend @GullitR will take the honours for me."

Van Persie hobbled off in the 61st minute of Sunday's match, which was decided by Dusan Tadic's winner.

After a slow start to the season, Van Persie has started to find some form of late, scoring four goals in his last seven matches.

United will assess the 31-year-old's injury on Monday.