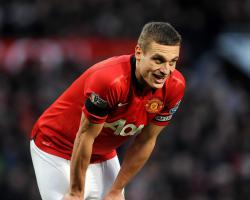 The Serbian defender becomes a free agent at the end of the season and is expected to be Inter's first summer signing.

Thohir told inter.it: "Vidic? I can't say anything even if the deal is 90 per cent done.

"It's better to announce it once everything is completed.

"I don't want to declare something that has not taken place."

The 32-year-old Vidic confirmed earlier this month he would be playing abroad once his contract with United expired this summer.

Inter are fifth in Serie A and likely to miss out on playing in next season's Champions League.

The Nerazzurri trail 11 points behind Napoli, who are third and hold the last qualifying spot for Europe's elite club competition.

Inter are keen to strengthen their defensive line as they have the weakest back line of the top six teams in Serie A, with 28 goals given away in 24 games.

It was confirmed on February 7 that Vidic would leave United at the end of the season.

He said at the time, in a statement released by United: ''I have decided that I will move on at the end of this season.

"I want to challenge myself again and try to make the best of myself in the coming years.

"I'm not considering staying in England as the only club I ever wanted to play for here is Manchester United and I was lucky enough to be part of this club for so many years.

"I've got a few options to move on and I will choose the right one for me and for my family."

The player has been one of the most popular members of the Red Devils' squad since he arrived from Spartak Moscow for ?7million - a transfer bizarrely announced on Christmas Day in 2005.

He has played a central role in virtually all United's significant triumphs since then - Vidic did recently reveal he handed his first winners' medal from the 2006 League Cup to Giuseppe Rossi as the Italian had played in all the previous matches up to the final.

Last May, Vidic skippered United to their historic 20th championship - his fifth and the last under Sir Alex Ferguson.

However, the tough defender made only 19 league appearances as he battled to overcome a serious knee injury, suffered in a Champions League defeat to Basle in December 2011 that required two major operations, ruling Vidic out for extended periods on both occasions.

It was argued by some that Vidic has never been the same player since, although for experience alone he would still be an invaluable presence, especially as long-time defensive partner Rio Ferdinand seems certain to be leaving as well in the summer.