Irwin sympathy for stars of today 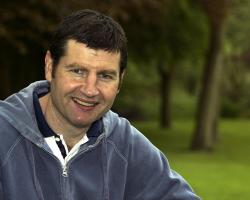 Irwin said: " Back in my day you had to be mentally strong but even more so nowadays because you are in a goldfish bowl

"When you are a player here you know someone is after your place, whether it is a young lad or someone being linked in the papers, and you have to be mentally strong to handle that as well.

"There is more social media nowadays and the players are even more in a goldfish bowl than even in my days, but that is part of life.

"You are privileged not just to be professional footballers but playing for a club like this and they know it as well."

Irwin was speaking alongside former United team-mate Bryan Robson at a press conference to promote a Manchester United Legends match against a Bayern Munich team on June 14.

Robson has been impressed by Rooney's performances of late, with the goal against Spurs taking his tally to five in the last six matches

"I think Wayne has been one of our most consistent players this season," added Robson

"The reason he hasn't been scoring so many goals is the manager (Louis van Gaal) decided to play him in midfield and he did a good job in there for the club at that time but now he has moved forward he has been scoring a few more goals again.

"That is a good sign heading into the important part of the season when it all matters."

Liverpool are only two points behind fourth-placed United and Sunday's game is being billed as the chance for the Merseysiders to claim the initiative in the race for Champions League qualification but Robson believes the opposite is also true.

"It is going to make it a hard run-in for Liverpool if we can go to Anfield and win the game and that is how positive the players have to be," Robson told Press Association Sport.

"They have to be on the front foot thinking 'If we win this game it will make it more difficult for Liverpool'.

"I am sure it will be highly competitive and played at a real fast pace but it is one for players to look forward to these challenges.

"No disrespect to the other teams but the history and rivalry between Manchester United and Liverpool has gone on since the '60s and that is why the fixture is very important to both sets of fans and players.

"When you look back at United they haven't been playing fluent football but apart from the slip-up against Southampton we have been in pretty good form ourselves and we haven't been beaten too many times in the league."