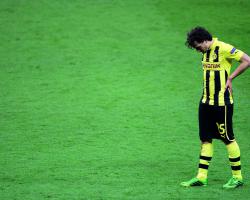 Borussia's captain, 26, has a Dortmund contract until 2017, but has long been courted by United, whose current manager Louis van Gaal is looking for a defensive leader with the English giants poised to table a bid, according to UK media reports.

"If I was to transfer abroad at some stage, then it would only be to Manchester United," Hummels is reported to have said.

Hummels agent, his father Hermann, is a friend of United boss Van Gaal from when they both worked at Bayern Munich, where Hummels senior was youth team co-ordinator until 2012, while Van Gaal was head coach from 2009 until 2011.

Dortmund CEO Hans-Joachim Watzke says the World Cup-winner has informed them he is weighing up his options.

"Mats had a conversation with (director of sport) Michael Zorc and myself two weeks ago, when he informed us that he is thinking about his future," said Watzke.

"That is completely legitimate.

"He has a contract until 2017 and we haven't received an offer, therefore we're pretty relaxed."

Dortmund have endured a poor season by their own high standards as the 2011 and 2012 German champions found themselves bottom of the table in February and are now up to mid-table in the Bundesliga.