Jose Mourinho- I dont celebrate - so why should Lukaku 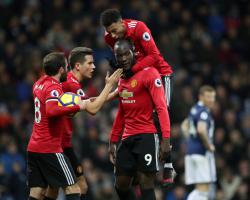 Lukaku did not celebrate, having spent a season on loan at Albion in 2012-13, and Mourinho claimed the Belgian might have taken his lead from his manager

He said: "I think two reasons

One: h is love for West Bromwich Albion

He was a happy kid here, they help him to feel loved, they made him feel at home

It was here he exploded in the Premier League

"Probably the second thing is he looks at me and I don't celebrate too a nd he says, 'If he doesn't celebrate why should I celebrate?'

"You don't go crazy when you win

You don't get depressed when you lose

You are much more stable with experience

Some other managers, they are different, and they don't change

If I score a goal in the last minute you will see me run, for sure, for sure

Mourinho added: "When my team is winning it keeps an emotional balance and we don't do circus

Also when we are losing, in a not happy moment, we try not to be depressed, we try to keep our balance."

but Mourinho vowed they would fight for the title.

He said: "Our last match in the Premier League is against Watford at Old Trafford in mid-May, and until then every match we go

We don't want to go on holidays

We want to play until the last match."

He said: "We were disappointed first half and I think I picked the wrong team really

The boys gave me so much at Liverpool

Obviously I'm getting to know them but I didn't think we had the energy in the first half we need against United."