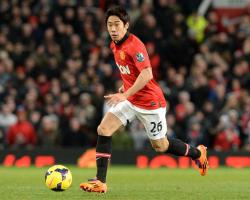 The former Borussia Dortmund playmaker has struggled to establish himself at Old Trafford but earned praise for his display against Swansea last weekend.

The Japan international was moved into a central position for the second half and excelled as United struck twice to claim a morale-boosting 2-0 win in the Barclays Premier League.

There has been debate about the 24-year-old's future but the player himself feels he knows where to improve.

Kagawa told ManUtd.jp: "I think I can still improve my strength.

"I'm not the tallest or biggest player, so I have to move my body more.

"Smaller players in the Premier League are very good at using their bodies (to get past the opposition) and that's what I will continue to do.

"I realise the Premier League is a very tough league and I know I have to be stronger."