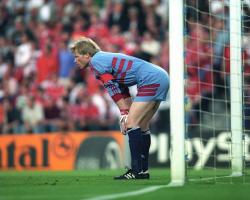 Kahn told German fans' website Fanbookz that he had a "serious offer" from the Red Devils in 1994, but he instead opted to join Bayern Munich, with whom he played 14 seasons before retiring in 2008.

"He still holds that against me to this day."

"You never say no to Sir Alex," the Dane said on the same programme.

"It would have been a good experience for Kahn (at United)."

Schmeichel and Kahn were in opposing goals in the 1999 Champions League final, which United won with two stoppage-time goals after Mario Basler's early strike had put Bayern ahead.