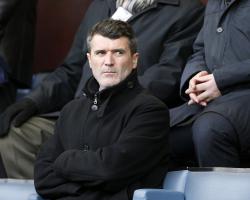 Keane, 43, is said to have behaved aggressively towards cabbie Fateh Kerar, 44, near traffic lights in Ashley Road, Altrincham, on January 30.

He did not attend a brief hearing at Trafford Magistrates' Court on Wednesday but a not guilty plea was entered on his behalf by his lawyer.

He is accused of causing harassment, alarm or distress to Mr Kerar - a Section 4A Public Order offence.

The court heard the prosecution will call two witnesses - understood to be Mr Kerar and a taxi passenger - while the defence will call Keane and an additional witness.

No CCTV of the incident was captured, the court also heard.

Keane will face trial at Manchester Magistrates' Court on June 19.

Mr Kerar, from Altrincham, says an altercation took place after he and his passenger noticed Keane in his Range Rover vehicle.

Keane, from Hale, Cheshire, enjoyed a trophy-laden career at Old Trafford and also played for Nottingham Forest and Celtic.

The straight-talking TV football pundit managed Sunderland and Ipswich and was assistant boss at Aston Villa before he quit to concentrate on a similar role he holds with the Republic of Ireland's national team.