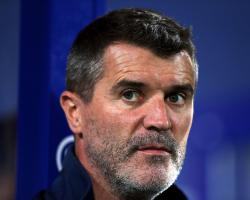 Former Manchester United captain Keane, 43, has been summonsed to go before Trafford Magistrates' Court after police received a report he had behaved aggressively in the incident in January.

It is alleged that Irishman Keane got in to the row with cabbie Fateh Kerar, 44, near traffic lights on Ashley Road in Altrincham on January 30.

In a statement, Greater Manchester Police (GMP) said: "A summons was posted for Roy Keane to his home address in Hale to appear before Trafford Magistrates court on 31 March for a Section 4A Public Order offence.

"This is in relation to an incident on Friday 30 January 2015 when police were called to Ashley Road, Altrincham to a report that a man had behaved aggressively towards another man."

Mr Kerar, from Altrincham, has claimed the alleged row was triggered when he and his passenger noticed Keane parked in his Range Rover near the former footballer's home in Hale, Cheshire

The public order offence Keane has been summonsed for is for types of conduct which may at least be capable of amounting to threatening, abusive or insulting words or behaviour, according to Crown Prosecution Service guidelines.

The tough-tackling midfielder enjoyed a trophy-laden career at Old Trafford and also played for Nottingham Forest and Celtic.

His no-nonsense approach, on and off the field, has seen him establish himself as a straight-talking TV football pundit.

He has also managed Premier League Sunderland and Championship side Ipswich but he recently gave up his job as assistant manager of Aston Villa to concentrate on a similar role with the Republic of Ireland's national team.

Keane will appear in court on March 31.