​Manchester City defender Kyle Walker has revealed that Manchester United fans have been telling him that they want the Citizens to win the Premier League title ahead of Liverpool this season.

City play United in the Manchester derby at Old Trafford on Wednesday, with the visitors two points behind league leaders Liverpool, albeit with a game in hand.

Although Manchester United still need as many points as possible to maximise their chance of qualifying for next season's Champions League, some fans remain divided ahead of Wednesday's derby. Should United win or draw they would hand a big advantage to fierce rivals ​Liverpool in the ​Premier League title race.

England defender ​Walker has claimed that he has encountered United fans out on the street who have told him of their preference for ​​City to win the title.

Speaking to ​The Telegraph, he said: "United fans are in a difficult situation obviously. When I'm out and about or walking my dogs, United fans are coming up to me saying, 'We'd rather City win the league than Liverpool'." 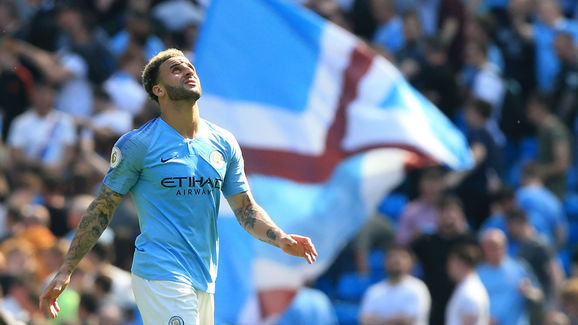 Ole Gunnar Solskjaer's side were hammered 4-0 by ​Everton on Sunday, damaging their hopes of finishing in the top four and qualifying for next season's ​Champions League.

Walker says that while some United fans told him of their preference for City to win the league, he does not expect the Red Devils players to be as accommodating on Wednesday.

He said: "It's strange to hear but I can assure you the United players aren't going to leave a red carpet and say 'Go on City, score past us'.

"They're going to make it difficult because it's a game of football and they're fighting for top-four as well so they need the points." United delayed City from winning the title last season, when they came back from 2-0 down at half time to win 3-2 at the Etihad. City would proceed to win the title the following week but Walker is determined to prevent a repeat of that game.

He added: "Obviously we could have won it against them last season and they scored a couple of good goals and got the victory. That probably what every United fan wanted with City not winning the title at the Etihad against United.

"We don't owe them one because we won against them [3-1] earlier in the season but it's one for the fans and it's one for us to get closer to being the Premier League champions."