Images of United's new outfield home jersey for next season have already been widely circulated, despite it not being officially released. One retailer even prematurely listed the shirt, which pays tribute to the treble in 1999, for sale earlier this month.

But the leak from Footy Headlines appears to be the first published image of what United's goalkeeper, whether it be David de Gea, Sergio Romero, Dean Henderson or someone else, will be wearing between the sticks next season.

The design appears to be a custom one rather than from the typical adidas templates, while the purple is somewhat reminiscent of a kit worn by Peter Schmeichel during the 1996/97 season. 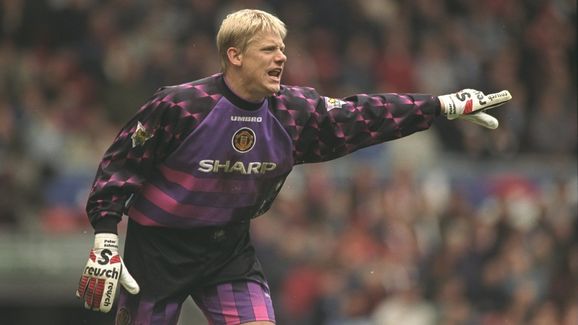 Just like on the expected home shirt, the United badge on this goalkeeper jersey is housed inside a shield, a nod to the design of the special European shirt worn between 1997 and 2000 and particularly associated with the treble winning campaign.

David de Gea is facing a potentially uncertain future at Old Trafford. The Spaniard has just one more season left on his current United contract and is yet to agree a new one. His form has also dipped dramatically in recent weeks after costly high profile errors in a number of games.

Aside from Romero and Henderson - who kept 22 clean sheets in the Championship this season with promotion-winning Sheffield United - Lee Grant, Joel Pereira, and Kieran O'Hara are the other goalkeepers currently on the books at Old Trafford.

Pereira, who was liked by Jose Mourinho, has spent the 2018/19 campaign on loan at Vitoria de Setubal in Portugal and Kortrijk in Belgium. O'Hara, meanwhile, has just finished a loan with Macclesfield Town in League Two, helping the club escape relegation from the EFL.