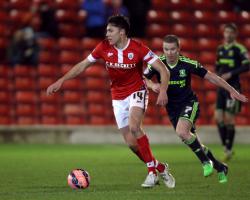 The 20-year-old is regarded as a star of the future after making nine first-team appearances for the League One outfit and had Liverpool also interested in bringing the player to Anfield but it seems that United have made the first move.

The big midfielder joined the senior setup in 2011.

Digby has been part of the England Under-19 and Under-20 outfit, gaining three caps with each setup

In a tweet Manchester United confirmed that he played for their Under-21 side against Stockport.

A report in the Metro claims that United are confident in completing a deal for the player who will certainly help with raising the home-grown quota.