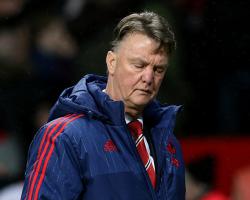 The Dutchman saw his side score three times and still not win as Newcastle fought back to snatch a 3-3 Barclays Premier League draw at St James' Park on a night when the United boss could hardly claim to have been bored.

However, he insisted his team was able to attack more freely than in recent weeks because the Magpies did the same.

They wanted to attack, and that is the difference

I am saying that all the time, but you are doubting my words and my vision.

"When you see two teams who want to attack, then you see a game like this

But when you see a match that only one team wants to defend and wastes time and frustrates the opponent..."

United led 2-0 and 3-2 on Tyneside as Wayne Rooney claimed his 10th and 11th goals of the season either side of Jesse Lingard's 37th-minute strike.

Georginio Wijnaldum had kept the home side in it at 2-1 and Aleksandar Mitrovic levelled from the penalty spot with 67 minutes gone before Rooney and Newcastle full-back Paul Dummett both scored inside a riotous final 11 minutes.

Van Gaal said: "We have scored three goals and have one point

I have said in all my press conferences that you have to score one more goal than your opponent, and we didn't do that."

Opposite number Steve McClaren was understandably delighted with a concerted fightback which ended his side's run of four successive 1-0 defeats on a night when the club paraded January signings Jonjo Shelvey and Henri Saivet in front of the fans.

Shelvey had completed his ÃÂ£12million switch from Swansea just a couple of hours before kick-off, and his new boss was delighted to have landed him.

McClaren said: "I couldn't believe it when he was up and we've actually got him

I didn't think they would sell, but we are delighted they have done and we have got him.

"He's a young player who with the Euros coming, he wants to be in that England squad, so he has got a lot to fight for from now until the end of the season

That's got to be of benefit for us."