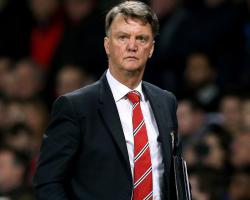 While the pressure on Van Gaal is now not as intense as it was towards the end of 2015, when his team went on their worst run in 26 years, an early exit from the FA Cup at the hands of Sheffield United would shift the spotlight back on to the Dutchman.

Van Gaal took the flak for that sequence of eight matches without a win, but his players must shoulder some of the blame too.

The United manager hinted on the eve of Saturday's third round tie that life had almost become too easy for his players.

Van Gaal is, quite understandably, keen to foster a harmonious environment within his squad, but he claims there should be plenty of room for constructive criticism at Carrington and Old Trafford too.

"No I don't think so," Van Gaal said when asked if the mood at United had been lifted following a win over Swansea and a draw versus Chelsea.

"I think the atmosphere in our dressing room is very good

Maybe too good because they are always protecting the dressing room, their colleagues.

"That is very good, until a certain point."

Van Gaal has also revealed he has taken steps to ensure the dressing room is more democratic.

The United boss has started asking his players for more input with regard to tactics and game plans in recent weeks in an attempt to turn the club's fortunes around.

"We have also changed our approach to the players to make it more easier to take responsibility," he said.

"I have stimulated them to think about football

The game is a brain sport and now you can let them think with you and therefore you can change your approach and so the players take the commitment for example for the game plan and other kinds of decisions and then the commitment is higher and bigger I think.

"But we have to see how it shall work."

Despite returning to winning ways against Swansea last weekend, Van Gaal still has his critics.

A number of ex-United players, including Paul Scholes, Gary Neville and Rio Ferdinand, have criticised the Dutchman.

And this week Herbert Hainer, the Adidas chief executive who signed off a ÃÂ£750million kit deal with the club 18 months ago, said United's playing style is "not exactly what we want to see."

Nigel Adkins is a big fan of the United manager, however.

''He is a vastly-experienced manager with an unbelievable amount of trophies and plays great football, possession-based football

''Maybe the supporters might see it a different way - everyone is different with it."

The Blades sit some 46 places below United in the league ladder, but have earned a reputation as cup upset specialists after beating West Ham and Southampton to reach the semi-finals of the Capital One Cup last season