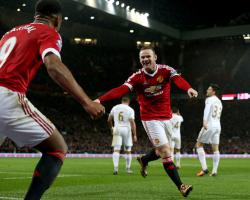 Rooney moved ahead of Denis Law in the United scoring charts when he flicked Anthony Martial's cross into the net to seal a much-needed 2-1 win over Swansea on Saturday.

The 64-year-old thought otherwise, but his team were turgid and poor in the first period and despite an improvement after the break, it did not come as much of a surprise when Sigurdsson stooped and guided Modou Barrow's cross over De Gea and into the net with 20 minutes left.

"He scored a fantastic goal, with his left foot behind his right foot and you cannot imagine what a goal that is," the United manager said.

There is a statue of him arm in arm with George Best and Sir Bobby Charlton - the other two members of United's famed Holy Trinity - outside the East Stand of Old Trafford.

Rooney's form this term may not be fitting of a club hero, but on Saturday he dug his team out of the dirt when it mattered the most.

The England captain has played 99 more times than Law so his strike-rate is poorer than the Scot's, but Van Gaal insists nothing should detract from Rooney's achievement.

"It is amazing and that on the age of 30 years," said Van Gaal, who was unaware of the feat until Rooney informed him after the final whistle.

"Now we are playing much more matches but still it is an achievement.

"For me, it is more important he scores today

I hope it is a fantastic starting point for the team and for him."

Van Gaal hopes this win will kick-start United's season too

Had they failed to beat a struggling Swansea side, more questions would have been asked about the Dutchman's future, particularly with Jose Mourinho and Pep Guardiola still on the market.

The manager thought his players gave their all for him on Saturday.

"All the players have done their utmost best and that is very important for the manager," he said.

There were a few boos at half-time when United failed to score in the first half for the ninth home game in succession, but despite registering only three shots on target and playing slowly, Van Gaal was happy with his team's performance before the break.

"I think the first half was a better half than the second," he said.

We don't give any chances away in the first half and we played with three defenders."

There was bad news for Van Gaal regarding Phil Jones, who had to be replaced at half-time with an ankle injury, but Ashley Young only came off because he was stiff, his manager said.

Swansea could have nicked an equaliser right at the death when Fabianski came up for a corner and met Sigurdsson's cross, but the goalkeeper headed inches wide.

He reckons it was from the edge of the box when he headed it," said Swansea caretaker manager Alan Curtis, who was disappointed to see his team leave with nothing.

"When you equalise so late in a game you are hoping we could hang on, but it wasn't to be," he added.