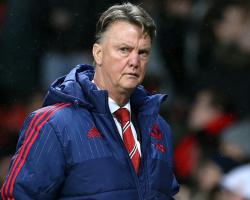 of the dull 1-0 win over Sheffield United

Thousands of fans streamed out of the stadium on Saturday evening before the end of the third round tie, which the hosts won thanks to a penalty three minutes into stoppage time from Wayne Rooney.

United did not register a shot on target against the League One side until the 69th minute and were booed off at half-time.

But Van Gaal insists supporters should be happy with the way their team have returned to winning ways in recent weeks following a run of eight matches without victory.

The United manager said: "You have to be happy as a Manchester United fan that we are in next round and we have won the last two games."

When asked why many had left the stadium early, Van Gaal said: "They are not thinking that we would score, I think, and maybe also because of the traffic that they leave the stadium a few minutes early.

"There are many reasons."

Van Gaal added: "I think the fans have supported our team

It is not an easy time now, so I think the fans were there also.

"How many stadiums were like our stadium, full, I think?

Paul Scholes tore into Van Gaal after the final whistle, claiming the players looked and the manager looked "bored".

Van Gaal refused to respond to the outspoken former United midfielder at his press conference on Monday.

The Dutchman snapped: "What do I have to do now? React to Paul Scholes? Do you want that?"

Scholes' jibes may not have hurt Van Gaal, but the United boss seems to have been affected by the ironic cheers that came when Memphis Depay fired a low shot wide just after he came on in the 60th minute and when Sheffield United goalkeeper George Long made his first save of the match from Matteo Darmian soon after.

"Yeah, I can understand that," Van Gaal said during a fiery media briefing at Carrington.

"Because it was that we were not shooting too much or not able to shoot at the goal so much.

"That they are ironic, I can imagine."

Van Gaal repeated his claim that it was always going to be hard playing against Sheffield United despite the fact that they are ninth in League One having lost to the likes of Crewe, Bury and Colchester this season.

"I think that you always need to take into account how your opponent plays," he said.

"They defended with 10 behind the ball

The 64-year-old used a well-worn phrase to illustrate his claim that United are steadily heading in the right direction under his leadership.

"It is a process," he added

"I have said many times.

"We are in that process

We have ups and downs

We have won two times in a row."

Van Gaal's hopes of registering a third win in succession have been hit by an injury to Bastian Schweinsteiger, who will miss Tuesday's game at Newcastle because of a knee injury he suffered in the dying stages of Saturday's game.

The United boss told MUTV: "Bastian is injured, that we know

We have seen that because he could not move (at the end of the game against the Blades)."

Marcos Rojo, Luke Shaw and Antonio Valencia are unavailable because of long-term injuries while Phil Jones is likely to miss out because of an ankle problem he sustained in the 2-1 win over Swansea on January 2.

Ashley Young, Morgan Schneiderlin and Michael Carrick were rested for Saturday's game because they had played too many matches and were "in the red zone", according to Van Gaal, but they could return for the trip to Newcastle.

"We have to see if (the other) players are still overloaded or not," Van Gaal said.