Louis van Gaal- Manchester United only have themselves to blame 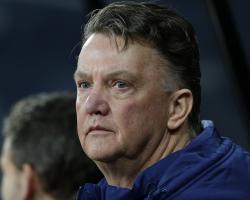 The Dutchman saw his side race 2-0 ahead and after being pegged back, go 3-2 up with just 11 minutes remaining before unlikely hero Paul Dummett rescued a point for the Magpies on an eventful evening at St James' Park.

Van Gaal, whose side have now slipped to sixth place in the Barclays Premier League table after a run of just one victory in eight attempts, said: "I am very disappointed, but we have to blame ourselves because we could have finished this match much earlier

I have said that also to my players.

"The referee makes a decision on a penalty that maybe has a big question mark over it, but we could have finished the game by ourselves much earlier.

"There was the deflected shot from Dummett to equalise, but okay, that is happening and that is luck for Newcastle United

But you have to force the luck and finish the chances when you get them when they are so big."

Rooney's ninth-minute penalty got United on their way and they looked to be coasting when Jesse Lingard made it 2-0, although Georginio Wijnaldum gave the Magpies hope three minutes before the break.

Aleksandar Mitrovic levelled from the spot with 67 minutes gone, but Rooney looked to have won it with a fine 79th-minute strike until defender Dummett lashed home a last-gasp equaliser with the help of a deflection off Chris Smalling.

Referee Mike Dean gave two penalties on the night - one to Manchester United for handball against Chancel Mbemba and the other to Newcastle for Smalling's tussle with Mitrovic - both of them contested by the respective managers, and might have given at least one more.

Van Gaal added: "In my opinion, there is no discussion about the penalties

He did it with purpose and consciously, so that is a penalty.

"The heavyweight wrestling between Mitrovic and Smalling, you can clearly see that he [Mitrovic] is pushing the head of Smalling to the ground

I cannot understand that."

Newcastle boss Steve McClaren, who said he "couldn't believe" the penalty awarded against Mbemba, was delighted with the way his players, watched by new signings Jonjo Shelvey and Henri Saivet, fought for their point.

He said: "We were talking about 'Boring, boring United' and Newcastle having questionable character - I think both teams showed that that's not true

You don't realise what a monumental effort that is, to come back from 2-0 and 3-2, and to perform as we did."

It proved to be a good day for McClaren, who revealed his delight at the acquisition of Shelvey in particular.

He said: "When I came in in the summer and we were looking at quality players and young players and English players, we tried to get Jonjo Shelvey then.

"It wasn't to be, but I am delighted to get him now

He's 23, he's English, he's in the England team and I think he's got more to come, and certainly will add quality and character to this team."