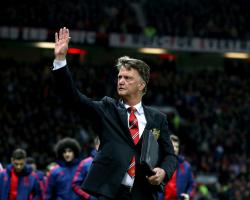 Van Gaal has come under increasing scrutiny in recent weeks following a run of one win in nine matches.

The United manager has been linked with a number of players, including Gareth Bale, Sadio Mane and Felipe Anderson of late after he admitted the lack of goals within his team is a concern.

Van Gaal is also understood to be considering recruiting a full-back as he has been left short in that area thanks to injuries to Luke Shaw, Antonio Valencia and Marcos Rojo.

The Dutchman, writing in his programme notes ahead of Saturday's FA Cup third round tie against Sheffield United, concedes January is not the best time to buy, but he is not ruling out bringing in new faces this month either.

"January brings the opening of the transfer window and, as I have already seen, we have been linked to a host of players," the United manager wrote.

"I don't see January as the ideal time to do business as the players cannot then have the pre-season that I feel they need to be integrated into the squad, both on and off the pitch.

"However, if I and the coaches feel that something can be done to improve the current squad then that is something we will look at if the opportunity does arise."

Van Gaal's only signing of note last January was free agent Victor Valdes, who agreed an 18-month contract with the club.

A year on, the three-time Champions League winner is free to leave the club following a bust-up with Van Gaal, who accused the goalkeeper of refusing to play for the under-21 side last season.