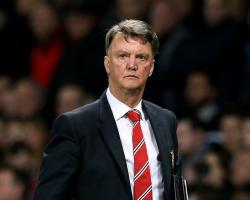 Guardiola announced this week that he is to leave Bayern Munich at the end of the season.

Manchester City are the favourites to appoint Guardiola, but Manchester United have been mentioned as a possible destination for the former Barcelona manager.

Van Gaal insists Guardiola's arrival does not put any extra pressure on his shoulders, however, as he thinks he is secure in his job despite United's recent poor form.

"Every manager has that right to announce (he is leaving)," the United mannager said.

"I 'm at the end of my career so for me it's not so interesting, for me (Guardiola's declaration) is interesting how I take care of Manchester United in my contract and after this season I still have one year to go."

Van Gaal has no problem with Guardiola announcing his departure from Bayern before the end of the season as he declared he wanted to come to the Premier League when he was still Holland coach in 2014.

"I have said that two years ago also so it's not so strange," he said.

"Some people are looking a little bit strange to that fact but that's good.

"Managers have ambitions and Pep Guardiola has that ambition too and he wants to sniff to the culture of England and the Premier League and I wanted that also.

"I think that it is very good he wants to do that and I don't think it will interfere in his club now."

Van Gaal does not believe it is certain two-time Champions League winner Guardiola will be in England next year, anyway.

He added: "It's not for sure he will be the manager of a Premier League club next year.

"The Premier League club is also partner of a contract so he has to believe in you."