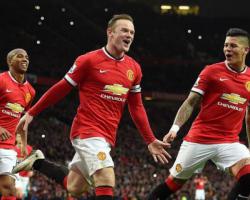 Rooney converted a controversial 66th minute penalty and nodded in an opportunistic header in the closing stages at Old Trafford to hand United a 2-0 win that consolidates their position in the top four.

Rooney had gone over two months without scoring a league goal before this weekend, although his chances of finding the net have been inhibited by the fact he has largely been playing in midfield.

Van Gaal had complained prior to kick-off that none of his forwards looked capable of scoring 20 goals this year, but he thinks Saturday's brace will do wonders for Rooney's self-belief.

"Everyone needs confidence, when you score two goals it will lift your confidence," the United manager said.

"I am happy he scored twice."

Few queried referee Roger East's decision to point to the spot when Radamel Falcao tumbled to the floor in the area in the second half, but what followed left many inside Old Trafford scratching their heads.

Although John O'Shea clearly committed a foul by pulling Falcao back, East sent Wes Brown off instead even though the former United right-back appeared to make little if any contact with the striker.

Sunderland have decided to appeal the red card and hope the player will be available for Tuesday's match at Hull.

Van Gaal refused to condemn the referee after the final whistle.

That's a mistake but you and I make mistakes," he said.

Van Gaal's opposite number Gus Poyet was phlegmatic on the matter, although he admitted the decision had a big bearing on the game's outcome.

"The penalty changed the game completely," the Sunderland manager said.

"It was difficult to see from the bench

It didn't look an easy decision.

"I am going to analyse it with the people from the club and we are going to make a decision accordingly."