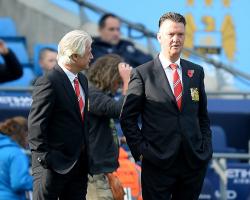 Van Gaal's first Manchester derby at the Etihad Stadium last November was one to forget for the Dutchman.

He was all smiles before kick-off, even agreeing to requests for selfies from the City fans, but the day ended in disappointment as United lost 1-0 after playing 51 minutes with 10 men following the dismissal of Chris Smalling.

United dropped to 10th in the standings, but five months on, the tables have turned

United are third, one point above City after a run of five straight league wins.

Van Gaal is often viewed as something of an egotist, but he rejected the opportunity to take credit for his team's recent improvement.

"The key are the players," the United boss told MUTV when asked for the reason behind the improvement.

"The players are developing themselves in the process we have done with each other, and I believe it is not only the last five matches.

"In more than 20 games we have only lost two times

It is a long row of matches.

They have to do it at the right time

There is always resistance.

"We have one more point than City now, and we are one point behind second in the table (Arsenal) so that speaks for themselves."

United played with flair, width and purpose in their recent wins over Tottenham, Liverpool and Aston Villa.

Ashley Young, Juan Mata and Wayne Rooney have formed a lethal front three while Marouane Fellaini, Michael Carrick and Ander Herrera have given the midfield a balanced and productive look.

Van Gaal has resisted the temptation to recall Angel di Maria and Radamel Falcao, keeping the expensive pair on the bench, and his only change to the starting line up during those three games came when Marcos Rojo replaced the ill Chris Smalling for the Villa game.

Van Gaal has not ruled out making changes to his team though and he says Di Maria has been pushing himself hard in training this week.

Of course," Van Gaal said when asked if he was facing a dilemma over Di Maria.

"Every player is pushing, not only Angel di Maria, every player who is training in the first squad because they want to do their utmost best.

I said that to all the players that I like the fighting spirit of every player.

"Never change a winning team is an English expression but I have always my eyes open.

"It is not always like that, never changing a team."

One name certain to be on Van Gaal's team sheet is Wayne Rooney.

The United captain has found the net five times in his last six matches for the club and has scored a record 11 goals in Manchester derbies.

The most notable of those 11 goals, of course, came in 2011 when he grabbed the win for United at Old Trafford with a stunning bicycle kick.

Rooney believes the derby has had an extra edge to it since Sheikh Mansour took over City in 2008.

"In the first few years after I came here City were never a threat to the title or to us," he added.

"Over the last four or five years the rivalry has got a lot fiercer because we've been challenging for the same trophies.

So there is an edge to them more than there was before."