LVG- United could have won title 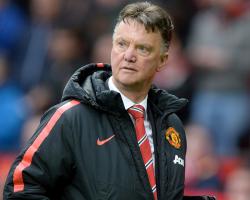 Table toppers Chelsea stretched their lead over third-placed United to 11 points last weekend with a 1-0 victory over the Red Devils at Stamford Bridge.

Eden Hazard grabbed all three points for the Blues with a 38th-minute winner, but in truth there was little between the two teams and Van Gaal is already plotting to overthrow the champions elect next season.

He admits he may not have had to wait that long before getting his hands on the top prize, though.

Had it not been for a poor run of three wins in their opening 10 games, Van Gaal thinks it could have been United running away with the title in April, rather than Chelsea.

"Yes, we had a very bad start," the United manager told MUTV when asked if he wondered what might have been this season.

"I have already explained that after several matches why so I don't have to repeat myself but if we had started well, we could have been the champions."

With Chelsea now two victories away from opening up an unassailable lead, Van Gaal has already admitted defeat in the title race.

His focus is now on qualifying for the Champions League.

The world's top club competition returned with a bang this week

Bayern Munich thrashed FC Porto 6-1 to set up a semi-final against Barcelona and Real Madrid edged a tense battle against their neighbours Atletico thanks to Javier Hernandez's 88th minute winner.

But while the rest of the football-loving public gasped and shrieked at a week of enjoyable continental football, Van Gaal did not enjoy it anywhere near as much.

As he watched the matches at his grand Cheshire home, all he felt was envy.

United, of course, are not in the competition this season after their seventh-placed finish under David Moyes last term

But Van Gaal hopes to be dining at the top table again next year.

"When I look to the matches this week also, great matches and also sometimes disappointing because the level was not always high and the difference between the teams was very high, I believe, so I miss it very much.

It is not done yet."

The squad will heed Van Gaal's warning about complacency

But given that United are eight points clear of fifth-placed Liverpool with five matches to go, it would take some collapse for the Red Devils to slip into the Europa League places.

The Dutchman has already started scouting players for next season

He has also taken comfort from the fact that some of his signings from last summer have started to find form.

Daley Blind and Ander Herrera are playing their best football of the season and against Chelsea Luke Shaw looked like the young left-back who shone so brightly for Southampton last season.

Shaw has not had the best of seasons since joining United from Saints for ÃÂ£28million, but Van Gaal is convinced the 19-year-old will grow into a man and excel next season.

"I believe in Shaw so for me it isn't a surprise he played very well against Chelsea and I am very happy for him," Van Gaal said.

"It is of course the first season for a 19-year-old boy because he is still a boy and he is growing and maybe next year he is an adult in the pitch and I hope so."

Van Gaal still has a number of players missing for Sunday's game at Everton.

Centre-back Jonny Evans returns from suspension, but there are doubts over midfield duo Daley Blind (ankle) and Adnan Januzaj (ankle).