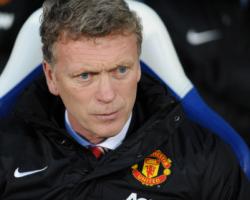 Not only does the competition represent United's last realistic hope of silverware this season, but David Moyes's side may need to win the Champions League just to qualify for next season's tournament.

United are currently 11 points below Liverpool, who occupy the fourth and final Champions League place, and with only 11 games of the season remaining, qualification via the league may already be beyond them.

United have won only four of their 11 matches since the turn of the year, but the Champions League provided a respite from their domestic woes during the European autumn.

The three-time continental champions qualified comfortably as Group A winners, winning four and drawing two of their six matches and enjoying handsome 4-2 and 5-0 victories over last year's runners-up Bayer Leverkusen.

Nevertheless, with Arsenal and Manchester City having already lost their own last 16 first-leg matches, to Bayern Munich and Barcelona respectively, the tournament final in Lisbon on May 24 remains a long way off.

"Only one team can win it, and it's very hard," United striker Robin van Persie told Champions magazine.

"It's a trophy many players don't win; once, if you're very lucky

You have a couple of players who've won it more than once, but it's a very special trophy everyone wants to win every year.

"It seems to get harder every year to win it, because the teams are getting better and better

So it's always hard if you want something everyone wants."

United warmed up for Tuesday's game at the Karaiskakis Stadium in Piraeus by winning 2-0 at Crystal Palace in the Premier League on Saturday, with Van Persie opening the scoring from the penalty spot.

It was a rare straightforward afternoon for United manager Moyes, who was able to start a game with Rooney, Van Persie, Adnan Januzaj and record signing Juan Mata in his team for the first time.

Mata is cup-tied in the Champions League, but Moyes hopes to have defenders Rafael da Silva, Phil Jones and Jonny Evans available to face Olympiakos after the trio sat out the trip to Palace due to injury.

United are unbeaten against Greek teams and Olympiakos have not reached the Champions League quarter-finals since 1999, although they have won at home to Arsenal twice in the last two seasons.

The Greek giants can nonetheless take heart from their breathtaking domestic form, having won 24 and drawn two of their opening 26 league games and reached the semi-finals in the Greek Cup.

Saturday's 4-0 win at OFI Crete came at a cost, however, with experienced Argentine striker Javier Saviola forced off with a left thigh injury that has ruled him out of the game against United.

Serbian forward Marko Scepovic, Saviola's replacement, scored a hat-trick, but he is ineligible to play against United, having turned out for Partizan Belgrade earlier in the tournament.

With top scorer Kostas Mitroglou having left for Fulham last month, Nigerian forward Michael Olaitan is expected to lead the line on Tuesday.

Olympiakos coach Michel, the former Real Madrid midfielder, believes that his side's performance against OFI proves that they are ready for the challenge of tackling United.

"I'd love to see my team have the same concentration, the same passion and enthusiasm that we had (against OFI) in the match against Manchester United," he said.

"We treat every match with the same seriousness and I believe we will also have a good performance on Tuesday in the Champions League."