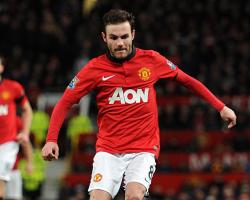 With 12 matches of the season remaining United find themselves in the unusual position of being way off the pace in the hunt for Champions League qualification.

David Moyes' side sit 11 points adrift of the top four in seventh position, but Mata is optimistic the Scot can still lead United into the Champions League.

Even if United do qualify for Europe's biggest club competition, it is clear that major changes to the squad are still required.

Vice chairman Ed Woodward confirmed last week that Moyes would be given substantial backing in the summer transfer window, and Mata is sure the club remain an attractive proposition for the planet's biggest players despite their current predicament.

"I don't know what will happen in the summer but the manager said the other day at a press conference that he's going to be signing players," Mata said in an interview with Canal Plus.

"I think this club is at a stage of change, but I can tell you that the best players in the world will always arrive."

The rebuilding process started with the acquisition of Mata for Â£37.1million in January.

And if reports in Portugal are anything to go by, then United have already started scouring the continent for further signings, with Porto defender Eliaquim Mangala said to have been watched extensively of late.

The striker is expected to commit his future to United this week.

The form of Rooney and Mata will be key to United's chances of finishing in the top four, and the Spaniard is confident that he and his team-mates can do it.

"The objective is to get to the Champions League spots," Mata added.

"It's difficult because Liverpool, Arsenal, Tottenham and Everton are playing well and fighting for the top four, but I think we have a team who can do it.

"This is Manchester United

When this club wins two, three or four matches in a row, it has a very important mental strength, a winner's mentality

We are coming and I think we can do it, but we have to win a lot of games first.

Unfortunately this year, things haven't gone so well in the league, but I believe there is still time this season."

While the United board and the club's fans have remained patient with Moyes despite the team's sub-par performances, there is a feeling within elements of the football world that the former Everton manager may not be cut out for the job.

Mata acknowledges that trying to emulate the trophy-laden era of Sir Alex Ferguson was never going to be easy, though.

"Everything Ferguson has accomplished is pretty much unattainable," United's club-record signing said.

"He has won everything possible to win with this club in the last 20-25 years and it's tough to maintain such a level of excellence.

"But at the end of the day, it was these players that won the league last season and the new manager has arrived knowing what this club is.

"I think he has a great relationship with Sir Alex Ferguson and with time everything will get better, the results will get better and we'll get back to being where this club deserves to be.

"My relationship with him is good, friendly and from the off, he seemed to me to be a great person."