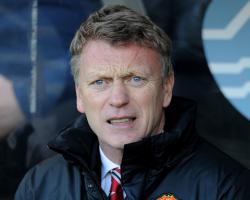 football.co.uk/match_reports/man_utd_swansea_3690793-9.shtml">Man Utd 1-2 Swansea: Match Report - view commentary, squad, and statistics of the game as it happened.

David Moyes' troubled debut campaign as Manchester United manager suffered yet another hammer blow as his mis-firing troops crashed out of the FA Cup 2-1 at home to Swansea.


Wilfried Bony's last-minute header left Old Trafford stunned as 10-man United were dumped out of the competition at the third-round stage for only the second time in 30 years.


Though Moyes might claim the result was harsh, United did little to impose themselves on the contest once Javier Hernandez had levelled Wayne Routledge's early opener.


The dismissal of Fabio, just four minutes after his introduction as a second-half substitute, for a late tackle on Jose Canas, merely made a difficult situation even harder and Bony eventually rose to meet Routledge's cross to give Swansea their first ever win at this stadium.


Former United boss Sir Alex Ferguson was in the stands to hear some admittedly half-hearted boos at the end for the Red Devils' fifth home defeat of the campaign.


They at least have a chance to make amends in just 48 hours when they visit Sunderland in the first leg of the Capital One Cup semi-final, although it is clear that Moyes is facing huge problems which he has no chance of addressing in this month's transfer window.


United were supposed to be having a much-needed diversion from their Premier League tribulations. But from early on it seemed the first of their back-to-back cup matches was going to bring more misery.


Swansea's opener was a well-taken effort, with Routledge lifting the ball neatly over Anders Lindegaard before it dropped into the net.


But the ease with which Alejandro Pozuelo drove his pass through a massive gap between Jonny Evans and Chris Smalling to send Routledge clear for his first goal in three months was startling.


Moyes was possibly still mulling over the ease with which Swansea scored when his own side levelled three minutes later.


There could be little other explanation why the Scot was completely unmoved by Hernandez's close-range finish to a brute of a cross from Alexander Buttner.


Even so, given the force with which Moyes has been actively pursuing left-back options since he arrived and his continued insistence Patrice Evra is not heading for the exit door, it can only be presumed Buttner's time at United is limited. If so, at least he is going out in style.


Taking advantage of the space afforded to him by Shinji Kagawa's preference to drift in from the left-flank, Chico Flores was given a pretty uncomfortable time of it.


Buttner dropped one far-post cross agonisingly over Antonio Valencia and also curled a low free-kick towards goal that was gathered up by Gerhard Tremmel.


Valencia also screwed an effort over from Danny Welbeck's lay-off as a United outfit missing Wayne Rooney and Robin van Persie through injury searched for a second.


A flurry of activity around the home box at the start of the second half brought Swansea no reward, with Pozuelo dragging a decent opportunity wide.


Bony sliced an effort off-target too, giving Lindegaard - making only his second appearance of the season - little to concern him.


Not that United were doing much to trouble their visitors either as their limitations were once again laid bare.


Despite winning a free-kick on the edge of the Swansea area, Moyes still carried through his threat to introduce Adnan Januzaj.


The 18-year-old was not involved as Tom Cleverley took the shot at goal, which went cannoning to safety off the wall.


Shortly afterwards, Buttner overhit a cross which ballooned beyond anyone who had a hope of reaching it.


The exit of Rio Ferdinand, who took a bang on the knee in a challenge with Bony, was not good news for the 35-year-old who had only just returned from a six-match absence.


A break in play to allow for Fabio's introduction merely added to the sense of a game going nowhere. The Brazilian's exit four minutes later, having been shown a straight red for a late challenge on Canas, prodded it into life.


Referee Mike Dean was within his rights to dismiss Fabio given his tackle was also over the top of the ball. But Canas' theatrical reaction did not help the United man.


And with his departure came yet another home defeat as Bony rose to nod home late on, delivering yet another shattering blow to the beleaguered Moyes.