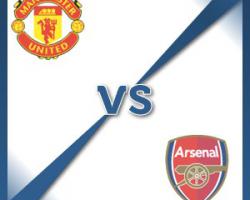 Man Utd V Arsenal - view commentary, squad, and statistics of the game live.LVG: Wenger is amazingManchester United boss Louis van Gaal believes the outcome of the FA Cup quarter-final against Arsenal will not just affect the destiny of the venerable old trophy but also the contest for the Champions League positions.The Gunners travel to Old Trafford on Monday to defend the trophy they won against Hull last season with the two sides neck and neck in the league - Arsene Wenger's side are one point ahead in third spot.Van Gaal said: "Arsenal and United are now in third and fourth place, so it is a big event with two good teams

It is very important game, not only for the FA Cup but also for the (Premier League) rat race."Van Gaal also paid tribute to the longevity of Gunners boss Wenger, who has been in charge of Arsenal since 1996.He added: "In my opinion what he has done is amazing

It can only be in England, I believe, where managers are so long committed with one club."It shows how much he can mean for a club as a manager

I like that - like Sir Alex Ferguson, Arsene Wenger - I think it's fantastic that you can do that."Striker Robin van Persie will miss the clash against his old club due to an ankle injury, and defender Jonny Evans will sit out after he was banned by the FA for six matches for spitting at Newcastle's Papiss Cisse.Wenger believes his side cannot expect to just defend deep and look to hit United on the counter-attack if they are to secure safe passage into the semi-finals.The Gunners head to Old Trafford on the back of a fine run in the league, with sevens win in the last eight games putting them ahead of United into third.The last time Wenger took his side to Manchester at the end of January, they produced what many believe was a pivotal defensive-minded display to beat City 2-0.Wenger, though, maintains a concentrated rear-guard action alone will not be enough to see off Van Gaal's side, who continue to grind out results despite a wave of criticism over their style of play."At Manchester City, we scored the first goal, then we were on a defensive foot because they had to come out, and that (who scores first on Monday night) is not predictable today (before the game)," said Wenger."But what is for sure is both teams will go for it, so that means we will have to attack well and defend well."Arsenal won against City despite having only 35 per cent possession.Wenger knows it is more about what you do when you have the ball than how long you keep hold of it."You have to analyse it

You also have to look at ways of possession - is it in your own half or is it in the opponents half? If it is in your half, it can be a bit illusionary possession," said the Arsenal boss."I still think possession is an important part of the game - you cannot go into a game and say you do not want the ball."Sometimes you do not have the ball because your opponent is better, sometimes you are leading 1-0 or 2-0 and your team is focused on defending the advantage."But overall I still think it is very important that the sport rewards people and teams who take initiative."Despite the inconvenient kick-off time for the final televised FA Cup quarter-final, Arsenal expect some 9,000 supporters to make the journey to the north-west.Two trains have been specially charted to help get fans back to London after the match, while the club have also subsidised 19 coaches.Wojciech Szczesny faces a fitness test following illness after missing the midweek win at QPR, as does Nacho Monreal (back) and Mathieu Flamini (hamstring).Gabriel has been ruled out for up to three weeks with a hamstring injury and joins Jack Wilshere (ankle), Mikel Arteta (ankle), Abou Diaby (calf) and Mathieu Debuchy (shoulder) on the sidelines