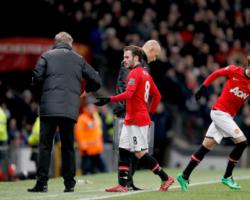 Vidic back for UnitedDeparting Manchester United captain Nemanja Vidic returns from suspension and is available for Sunday's home game against Fulham.Defender Jonny Evans (calf) is out, but fellow centre-back Phil Jones is available, even though he suffered concussion against Stoke last weekend.Midfielder Marouane Fellaini has been ruled out for one week due to a groin injury he suffered in training.This weekend will be the first time that Fulham manager Rene Meulensteen has come back to Old Trafford since leaving the United coaching staff in the summer.David Moyes opted to bring in a number of his own staff when he replaced Sir Alex Ferguson as manager.The former Everton boss revealed he was sad to see the Dutch coach leave United, however."Rene helped me when I first came here," Moyes said."I had several conversations with him

He helped me, told me about the club, how it runs and the players."In the end I would have liked him to stay at the time but he wanted to go and that was fine."I am looking forward to getting Rene back and seeing him."Meulensteen has struggled at Craven Cottage since replacing Martin Jol last December.Under the Dutchman, who has very limited managerial experience, Fulham have sunk to the foot of the Barclays Premier League.The pressure on Meulensteen intensified on Tuesday when the Londoners were knocked out of the FA Cup by Sky Bet League One strugglers Sheffield United.Moyes admits he feels sorry that talk has already begun about Meulensteen potentially losing his job after only two months at the helm."There's always disappointment when you see a manager lose his job, because it's a difficult job

You have to have very good owners and chairman," said the Scot."I've been really fortunate here that I've got great owners and a great board, I had the same at Everton and at Preston."Unfortunately some of those other managers have not had the same privileges I've had."But it's part of the job and you realise you have to work with the people who employ you and unfortunately some of them haven't had as good ones as I've had."Moyes has faced questions - from outside United - about his ability to bring the glory days back to Old Trafford following Ferguson's exit.The champions sit some 15 points behind leaders Arsenal in seventh place.Moyes is refusing to write off the title, but he admits the chances of retaining the championship are slim.Moyes said: "What we'll do is keep trying to win the next game

If we can do that we'll see where we go."We need teams to slip up if we are to have any chance."New Fulham midfielder William Kvist believes the club can go to United and come away with a positive result.A trip to the reigning champions would usually be met with trepidation by the current bottom side but, with United having already lost four times at home this campaign, Denmark international Kvist knows Fulham can target coming away with something."Teams have shown this season that it is possible to get points at Old Trafford," he said."Of course that will give us a little bit of confidence but we will have to focus on ourselves

At the moment we can't look at anybody else, we need to have all of our concepts clear

It is not a great situation at the moment and I think everybody is aware of that."Meulensteen is hoping club-record signing Kostas Mitroglou may play some part.The Greece international has been ineligible for Fulham's last two fixtures but Meulensteen will give him every chance to prove his fitness and make his debut at Old Trafford.Fellow new recruit Johnny Heitinga is more likely to feature while Lewis Holtby will return to the side after being cup-tied for the FA Cup replay defeat to Sheffield United