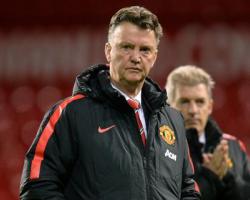 Man Utd V Southampton - view commentary, squad, and statistics of the game live.Van Gaal won't lower his sightsLouis van Gaal wants his Manchester United team to rule the world.Van Gaal's start to life as United manager may not have gone completely to plan, but his side are third in the Barclays Premier League thanks to a 10-match unbeaten run.Although some performances under Van Gaal have been far from spectacular, the 63-year-old has gone a long way to restoring the sense of grandeur about the 20-time English champions that was lacking during the failed reign of David Moyes.Having won titles in Spain, Holland and Germany, Van Gaal sets lofty ambitions for himself and he has made it clear he wants to bring the glory days back to Old Trafford soon.Van Gaal spent B#155million on new players last summer to help him achieve his aims and the club flexed their muscles again this week by beating a host of rivals to the signing of Victor Valdes as back-up to David de Gea."My ambition is that I have the best players who can collaborate with each other to form the best team in the world," the United manager said.Van Gaal reeled off his standard answer regarding transfer speculation when asked whether Valdes' arrival could prompt the exit of first choice David de Gea, whose contract expires in 18 months' time."I cannot discuss that with you," Van Gaal said at his weekly press conference."I discuss that with David and Victor and it shall be like that."Van Gaal again refused to discuss whether long-term targets like Kevin Strootman or Mats Hummels would also be coming to Old Trafford this month."I don't discuss that with you," Van Gaal said with a smile."You can ask it another way but I am always saying the same answer."There was a hint from Van Gaal that United are ready to snap up any of their targets if they become available though."We were very quick to buy Victor Valdes

Did you notice (that)?" Van Gaal said."When we can, we deal quickly."Ashley Young is the only absentee for the clash with Southampton on Sunday

He suffered a hamstring injury at Stoke on New Year's Day and will be out for four to six weeks, according to Van Gaal.Luke Shaw has recovered from his ankle problem and is therefore fit to face his old club.Daley Blind is also in line to return from the knee injury which has sidelined him for two months.Meanwhile, Ronald Koeman can see himself returning to Barcelona as manager one day, but the Dutchman's only focus right now is continuing Southampton's fine form.Life at the Nou Camp is rocky at the moment, with president Josep Maria Bartomeu announcing on Thursday that elections would be held early in a bid to lift the negative "tension" around the club.The term crisis is being bandied around and the Spanish press are reporting rising tensions between head coach Luis Enrique and some of his players, namely Lionel Messi.Koeman has been installed as the bookmakers' favourite to take over at Barca, thanks to his fine work at Saints and his history with the Catalan giants.Barcelona list the former defender amongst their "legends" after a highly-successful spell as a player at the Nou Camp - a place he can see himself returning to as manager, albeit not in the immediate future."At teams like Barcelona, if they lose games, there's always a lot of critics, rumours, speculation," Koeman said."I know because my whole life I'm linked to Barcelona, but it's not a time to talk about that, because I think it's not respectful to Southampton as a club, it is not respectful to the people of Barcelona."Asked if he could see himself managing the club one day, Koeman said: "Yes, but I had that [opportunity] sometimes and it never happened."Now I'm very happy to be here in Southampton and that's the most important [thing]."I started with a contract in Southampton and I like to respect to my contract and to the people."Koeman's goal now is to continue Southampton's remarkable campaign at Louis van Gaal's Manchester United.The Saints boss coached alongside his compatriot at Barcelona in the late nineties, but their relationship took a well-documented downward turn when they worked together at Ajax.That ill-feeling has now largely dissipated, although Koeman is desperate to get the better of his former mentor this weekend."It's nice [to beat him] because he is a very good coach," he said, having lost 2-1 to United last month."We had some problems in the past, but we shake hands and I hope he will do it on a good way with Man United and, of course, it's special to beat him, but I lost the last time."