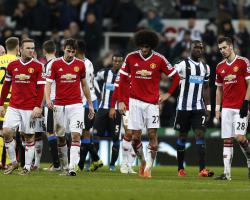 The full-back drilled home a superb 90th-minute equaliser to end a run of four successive defeats in all competitions after Wayne Rooney looked to have claimed the points for the visitors.

Rooney had opened the scoring with a ninth-minute penalty and Jesse Lingard made it 2-0 eight minutes before the break.

But Georginio Wijnaldum and Aleksandar Mitrovic gave the home side hope and although Rooney scored again 11 minutes from time, Dummett's late intervention denied Louis van Gaal victory on a night when he may well have been angry, but could not have been bored.

A crowd of 49,673 at St James' - among them new signings Jonjo Shelvey and Henri Saivet - rose before kick-off to pay its respects to the late Pavel Srnicek, the man between the posts on the day almost two decades ago that Newcastle famously beat Sir Alex Ferguson's side 5-0 on Tyneside.

But once the game was under way, referee Mike Dean did not endear himself to the locals when he awarded the visitors a penalty for handball against Chancel Mbemba as he contested a corner with Marouane Fellaini, although how much the defender knew about it was debatable.

Rooney, however, needed no second invitation as he dispatched the spot-kick with Mr Dean, who later decided not to repeat the dose at the other end after Daryl Janmaat went down in the box under Lingard's rash challenge, having been firmly installed as the villain of the piece.

Van Gaal's men extended their lead seven minutes before the break when, after Mbemba's loose pass had been picked off, they broke at pace and Rooney held the ball up before feeding a fine reverse pass to Lingard to score.

But Newcastle grabbed a lifeline four minutes later when Mitrovic headed down Fabricio Coloccini's long ball and Wijnaldum swept it past David de Gea for his club's first goal since December 19.

The Magpies returned in determined mood and went close seven minutes after the restart when Moussa Sissoko tricked his way past full-back Ashley Young and forced De Gea, who had produced a vital first-half block to deny Wijnaldum, to save again at his near post.

Lingard could have effectively sealed victory four minutes later, but shot high and wide with the goal at his mercy after being set up by Ander Herrera, but after Jack Colback had seen fresh appeals for a penalty waved away, Mr Dean finally pointed to the spot after Chris Smalling had hauled down Mitrovic.

The Serbia international dusted himself down to convert calmly from 12 yards to level, and the Magpies thought they had taken the lead two minutes later when Wijnaldum struck, but did so from an offside position.

Rooney looked to have won it with a stunning 79th-minute finish after substitute Memphis Depay's initial shot had been blocked, but Dummett grabbed a point at the death with a left-foot missile.

"This is what @premierleague is all about

Energy, goals and the passion of the players + fans!! #mufc" - former Manchester United goalkeeper Edwin van der Sar was amongst those taken in by Tuesday's encounter

Wayne Rooney was involved throughout, calmly converting his penalty, setting up Jesse Lingard for his goal and then smashing home the third.

MOMENT OF THE MATCH

Paul Dummett's piledriver which secured a precious point from a game in which he and his team-mates fought desperately hard to gain tangible reward.

VIEW FROM THE BENCH

Steve McClaren will have been delighted with the way his side fought to the death on a night when several key decisions went against them, but finally found their touch in front of goal

Louis van Gaal will have been happy with the way United attacked, if not with all of their finishing, but they were suspect at the back.

MOAN OF THE MATCH

All were tight calls and the two he gave were probably correct, but he looked to have missed a third.

It was a thoroughly entertaining match but one which left Manchester United boss Louis van Gaal frustrated.

"Of course it feels like a defeat," the Dutchman told broadcast media.

When the referee gives a penalty for nothing - it is a duel I think and you cannot decide who is worse - but we gave it away.

If we had, it would have been three successive wins at the start of the year going into Liverpool.

"It is not so interesting to create chances

In every press conference I say you have to score one more goal than the opponent."

"The crowd responded magnificently and we wanted to show everyone what we are about," he said.

"People said that United were boring and that we lack character, but we kept fighting until the end and we have got a goal that feels like a winner.

It must have been a great game for the neutral - it was a heart attack for the coaches."