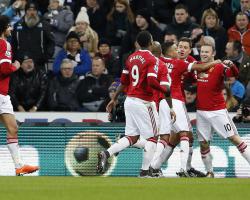 United squandered 2-0 and 3-2 leads at struggling Newcastle on Tuesday evening to draw 3-3, in the process slipping to sixth place in the Barclays Premier League table.

Rooney, who edged to within eight goals of Sir Bobby Charlton's club record of 249 with a double at St James' Park, admitted that his side had to find a balance between attack and defence after a game which went some of the way towards exciting the travelling fans.

He told MUTV: "After going 2-0 up, we were in control of the game, and then we've let them back into it

To then get our third goal and concede again was disappointing from us.

They have cost us two points so we're disappointed.

"We can't keep going on conceding three goals every game, so we have to work on that and create the chances without giving goals away.

"You can score as many goals as you want, but if you keep conceding goals, then it's a problem

We have to keep trying to get that balance right and keep creating chances, scoring goals and keeping them out."

It all started so well for Rooney and his team-mates when the England captain gave them a ninth-minute lead from the penalty spot after defender Chancel Mbemba was adjudged to have handled Daley Blind's corner and when Jesse Lingard made it 2-0 seven minutes before the break, they looked to be in complete control.

But Georginio Wijnaldum pulled one back before half-time and when Aleksandar Mitrovic levelled from the spot with 67 minutes gone after being hauled down by Chris Smalling, the Magpies were in the ascendancy.

Rooney's well-taken second looked to have secured victory with 11 minutes remaining, but Paul Dummett snatched a point at the death when his 90th-minute piledriver was deflected past keeper David de Gea by the unfortunate Smalling.

United, who have now won just twice in 11 games in all competitions, went into the game with manager Louis van Gaal having admitted even he had been bored by some of their recent performances and at 2-2, there were chants of "Attack, attack, attack" from the supporters high up behind Newcastle keeper Rob Elliot's goal.

Van Gaal blamed the negative tactics adopted by the club's opponents for their recent difficulties after the game, but Rooney insists scoring goals remains their focus as they prepare for Sunday's trip to Liverpool.

Obviously we know that's our aim, that's what we work on everyday at the training ground.

"Sometimes it's difficult, but on nights like tonight we did it so we need to keep working and keep trying to improve."