Manchester United in talks with Zlatan Ibrahimovic over new deal 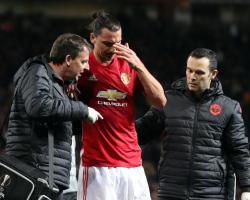 The 35-year-old confounded the doubters last season, plundering 28 goals before a serious knee injury brought his maiden campaign at Old Trafford to a shuddering halt.

Ibrahimovic was let go at the end of his one-year contract, but the veteran Swede is undergoing rehabilitation at United ahead of his expected return to fitness around Christmas.

Mourinho said during pre-season that a new deal was a possibility and confirmed ahead of the Premier League opener against West Ham that talks are under way.

"You know, he's injured, he needs time to recover," the United boss said

"He's not ready to play tomorrow.

"It's not something urgent, it's nothing that you are desperate to have it done or not done.

He thinks he can do more.

"He wants more at football's highest level, so we are having conversations and we are discussing the possibility of him staying with us for the second part of the season."

Mourinho still speaks of free agent Ibrahimovic as part of the group, saying he is injured for the start of the season along with other "important players" like Luke Shaw, Ashley Young and Marcos Rojo.

Such absentees means the United boss does not believe they have advanced hugely compared with this time last year, but he retains hope of making a fourth summer signing.

"You know, in my initial analysis coming from January and progressively through the other months, I was thinking about four players," the United boss said before facing the Hammers on Sunday.

"But I am not a difficult person to work with, in spite of sometimes it looks different or you want to make it look different.

"So I don't think I am in a position of crying, of moaning, of protesting.

"I am happy that the club managed to do 75 per cent of the work before the Premier League starts and if until the August 31 the remaining 25 per cent don't arrive, I will not moan.

"I will just go with everything I have to try to win every match we play."

Part of the delay has been Inter Milan's reluctance to sell Ivan Perisic, while speculation has recently grown over a move for Paris St Germain defender Serge Aurier and Tottenham left-back Danny Rose.

This week's remarkable interview by the latter has led links with Old Trafford to grow and Mourinho has not ruled out a move for a full-back this month.

Asked if full-back was an area he was happy with or looking to strengthen, Mourinho said: "You know 25 per cent means one of four.

"And we got a central defender that can play in many other positions, which is important

Victor can play right-back and can play central midfield.

"We got a central midfielder, we got a striker.

"Obviously the 25 per cent would be a player for another position, playing from the sides.

"But we have players and if we cannot strengthen the team in these areas, we have people that we can trust and we go for it."

One of the main objectives is to win the Premier League, having stumbled home sixth in a campaign that brought Europa League, EFL Cup and Community Shield glory.

Mourinho believes United are capable of winning a title in his second season, but is not kidding himself over the challenge that awaits them domestically.

"The Premier League is what you all know," he said

"The club are also what you know

"But we are involved in four competitions and step by step, match after match we are going to fight."