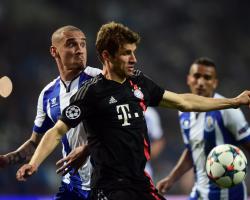 Bayern Munich fan favourite Muller has repeatedly been linked with a move to Old Trafford over the last 18 months with Louis van Gaal his former manager in Bavaria being a known admirer.

Thomas Muller confirmed that United had made enquiries.

ÃâAnd a request from a big club is an honour and a reward that oneÃâs performance is good.Ãâ

Muller quickly moved to stamp out any potential rumours though, by reminding us he has a contract with Bayern Munich until 2019.

ÃâBut I feel well at Bayern, and my contract runs until 2019

I will not say any more about the Speculations.Ãâ

The 25-year-old made his debut at Bayern Munich under current United boss Louis van Gaal and has previously spoke of the pairs 'special' relationship.